"Missing Migrants and Deaths at the EU’s Mediterranean Border: Humanitarian Needs and State Obligations" (or the "Mediterranean Missing Project") was a year-long research project running until October 2016, funded by the Economic and Social Research Council of the United Kingdom. Resulting from collaboration between the University of York, City University London, and the International Organization for Migration, the project was one of the first efforts to systematically collect data and comparatively explore current responses to migrant bodies in the Mediterranean, and the impacts of a missing person on families left behind. Country reports, from Greece and Italy, are available in long and short forms, summarising law, policy and practice around migrant bodies and their identification in the two contexts. This is the summary report about the findings in Greece. 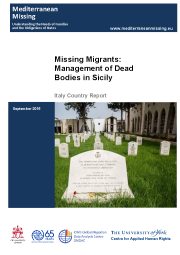